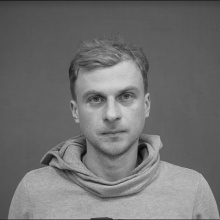 Andriy Lytvynenko received a degree in film and theatre directing from the Karpenko-Kary Theatre, Film and Television University in 2012. He was the author of the idea and one of the directors of the Beyond the Euro film almanac about the Euro-2012 World Football Championship. He has participated in the anthologies Ukrainian Voices, Euromaidan. Rough Cut, and Kyiv from Dusk till Dawn. In 2013, he received a Gaude Polonia grant and studied at the documentary studio of the Wajda School in Warsaw. He came up with the idea for The Trial. The State of Russia vs. Oleg Sentsov.