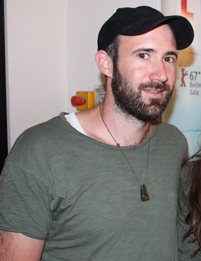 Patrick graduated from high school in 2001 in Staufen. On the occasion of his first trips, he discovered his passion for the film and then worked as an independent cameraman for Südbaden TV and later for various production companies and TV stations (SWR / ARD). In March 2013, he packed things up to go with his girlfriend, Gwen on a trip around the world, and the camera, of course, could not miss. That’s how his first feature film, Weit: The Story of a Journey Around the World came to be.